Singapore has the smartest kids and here’s what CNN said. It is what we all believed in all this time and more. Definitely been making waves last few years as Singapore is also getting noticed for being 2nd in Global Competitiveness http://www.weforum.org/reports/global-competitiveness-report-2015-2016. Not too shabby for the little Red Dot. Proudly Singaporean and more to come.

We extracted the whole article just in case it gets deleted further down the line but here’s a link to their article http://edition.cnn.com/2015/10/05/asia/singapore-smartest-kids/index.html

Why Singapore has the smartest kids in the world

Singapore (CNN)It’s a world-class teacher’s pet — a straight-A student that’s top of the class: Singapore is officially the country with the smartest high-school kids in the world.

The country’s academic success has helped it become a thriving economy, and the way it has built its education system could hold lessons for the rest of the world.

“Singapore is a fascinating case,” said Marc Tucker, the president of the U.S. National Center on Education and the Economy. “[It] was a major British port before the Second World War. When Britain got out and closed its base Singapore was in terrible shape.

“Now today they are one of the best performing economies in the entire world. They did it largely with education and training.”

If Singapore’s rags-to-riches transition was built on education, the secret of its education system is the quality of its teachers. “They source their teachers from among the best kids coming out of their high schools,” explained Tucker.

‘Creative use of knowledge’

In the post-war years, Singapore had a low-cost, low-skill labor market, and it was enough for its education system to aim for universal literacy. But starting in the 1970s, Singapore’s economic needs shifted. It was quickly moving toward high tech, white collar jobs and the education system needed to keep up. Soon, the aim was for a world-class education for every single child, and that meant moving on from rote learning to encouraging creativity.

“They had a drilling system when that was the only option — they had to expand education quickly,” said the OECD’s education director, Andreas Schleicher. “But as they had achieved this, they were the first to think about, what is it that our children need to be successful … (in) tomorrow’s economy?

“The emphasis on the application, the creative use of knowledge is very, very strong in Singapore and other Asian countries.”

The importance of education is instilled at a young age — before children even get to primary school.

“I think for us as preschool educators, we are the foundation years,” said Diana Ong, principal at Pat’s Schoolhouse Sembawang Country Club, a preschool in the north of Singapore. “We form the basic foundation.

“I think the first years of a child’s life is very important. So when you have a very confident child, that child’s confidence will carry him or her through primary school as well. Not only do you want a child that is smart, you want a child who is resilient.”

Schleicher says it’s part of the culture of many Asian countries for parents to prioritize their children’s education.

“It starts with resources, the priority they assign to education,” he explained. “In these countries, parents and grandparents are going to invest their last resources, their last money into … the education of their children.

“This is sort of a question of priorities. You can see in all tiers of public policy, education comes first. That’s your future.” 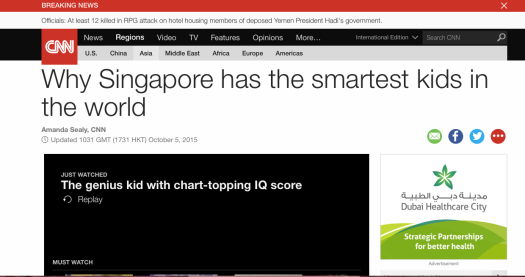